We are excited to announce principal casting for our two productions by Tim Rice and Andrew Lloyd Webber this summer: Evita and Jesus Christ Superstar.

“After an international search, I am incredibly excited about the amazing talent we have discovered, and the variety of voices we have assembled, to share this story today. Samantha Pauly will lead a thrillingly diverse and powerful company.” Jamie Lloyd, Director

Chicago-based Samantha Pauly makes her UK debut in the role of Eva Peron, direct from her performance in SIX (Chicago Shakespeare Theatre) and as Valkyrie in Bat Out Of Hell (US Tour). She appears alongside Ektor Rivera, also making his UK debut, having recently played Emilio Estefan in On Your Feet! on Broadway and US Tour. In addition to lead roles in Rent, Hairspray and High School Musical, Ektor was selected by Jennifer López to be one of the lead singers in the US Television and Live show Q’Viva! The Chosen, which was seen by over 30 million television viewers.

An original Broadway cast member of Disney's Aladdin - where he has been performing on and off for the last 5 years - Trent Saunders returns to the UK in the role of Che following his appearance as St. Jimmy in Green Day's American Idiot (Hammersmith Apollo). Nominated for an Olivier Award for her role as Kylah in Our Ladies of Perpetual Succour, Frances Mayli McCann plays the role of The Mistress.

Samantha Pauly, Ektor Rivera and Trent Saunders are appearing with the support of UK Equity, incorporating the Variety Artistes’ Federation, pursuant to an exchange program between American Equity and UK Equity.

The new cast of Jesus Christ Superstar which opens at the Barbican on 4 July includes: Robert Tripolino and Ricardo Afonso in the iconic roles of Jesus and Judas, with Sallay Garnett as Mary. Matt Cardle* plays the role of Pilate, with Cavin Cornwall and Nathan Amzi as Caiaphas and Annas. 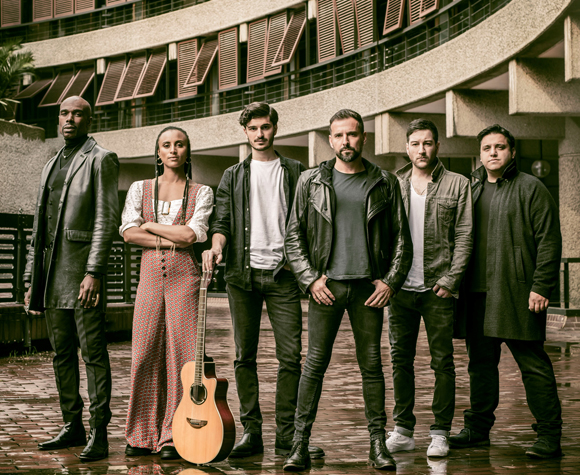 Ricardo Afonso (Judas) previously appeared as the Taxi Driver in Women On The Verge Of A Nervous Breakdown (Playhouse), as Alberto Beddini in Top Hat (Aldwych/UK Tour), Lead Vocalist in Thriller Live (Lyric), Galileo in We Will Rock You (Dominion), and as a lead vocalist in The Classic Rock Show (European/UK Tour).

Irish-Sierra Leonean artist Sallay Garnett (Mary) also performs and records under the name Loah. With her unique blend of Afro-soul, she released her debut album This Heart in 2017. She has toured in Ireland, the UK, Sierra Leone and the USA.

Matt Cardle* (Pilate) is a multi-platinum selling recording artist who has sold over 2.2 million records since he won The X Factor in 2010. He has released four studios albums including 2011’s Letters, featuring the single When We Collide, and most recently 2018’s Time To Be Alive; both on Sony Music. In 2015 he joined the cast of Memphis (Shaftesbury) as Huey Calhoun, winning him the WhatsOnStage Award for Best West End Debut, and he returned to the stage in 2018, appearing as Wally Strand in Strictly Ballroom (Piccadilly).

Currently appearing in Rip It Up (Garrick) Cavin Cornwall (Caiaphas) originated the role of Caiaphas in the Regent’s Park Open Air Theatre production of Jesus Christ Superstar, reprising the role at the Lyric Opera of Chicago in 2018. On film credits include, for the Star Wars franchise: Han Solo A Smuggler’s Trade, Star Wars VII The Force Awakens and The Last Jedi.

Nathan Amzi (Annas) most recently appeared in Heathers (Theatre Royal Haymarket). Other theatre credits include: One Flew Over The Cuckoo’s Nest (Sheffield Crucible), Prom Queen (The Other Palace), In The Heights (Southwark Playhouse) and Urinetown (Apollo).

For more information about Jesus Christ Superstar and to book tickets visit jcsuperstar.co.uk

We bid farewell to Stephen Sondheim

We, along with the entire theatre industry, were saddened to hear of the passing of composer and lyricist, Stephen Sondheim.

We are thrilled to hear we have received funding thanks to the government’s Cultural Recovery Fund. Culture creates jobs, supports livelihoods and brings joy to everyone.